Saori weaving has become a huge part of my life. It is an art and creative form that has felt like a part of me since I first sat at a loom.

This past September I was in Nova Scotia with my fella for a bit of a vacation and we stayed at a cottage near Pictou. I knew there were a few different farms and yarn shops nearby so we decided to do a bit of a tour. Sadly I forgot the camera so I have no pictures of my own to show you, only my memories and descriptions… (I have included logos and pictures from their websites with links to the sites for you to check out).

Travelling towards Tatamagouche from Pictou along the Sunrise Trail, … we saw the sign for Fibrepalooza and turned onto Toney River Road. It’s a kind of dirt road that takes you alongside the Toney River – quite picturesque in places. Eventually we came to another sign and turned onto a LONG driveway, passed some barns with all kinds of sheep and some chickens running around. Up in the trees we came to a house and were met by a couple enthusiastic dogs. There was no signage near the house so I wasn’t 100% sure we were in the right place but we got out and asked and sure enough we were!

Mary led us out back to the door to the shop, apologizing for the “mess” as she was rearranging some things. The mess - to me – looked like a wonderous, creative space full of colour, and I told her so. She was very gracious and let me look around for quite some time, even though we hadn’t called ahead like it says on the website to do. When I go again I will because I’d love to meet all the critters that they have and to talk to her a bit more. The philosophy of Fibrepalooza resonates strongly with me, as they are committed to globally fair traded as well as locally produced products and are ethically, sustainably and environmentally conscious.

I had looked at the website before and was eager to see the Be Sweet and Frog Tree yarns as well as all the yarn that is spun and dyed in house… I filled a basket and bought some lovely yarns. 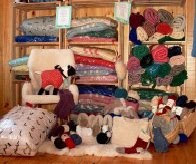 Walking into the shop at Lismore was like walking into a kaleidoscope of colour and texture. My head was on the swivel as I caught sight of an endless array of yarns that beckoned to be touched. There are also some woven and knitted products there including beautiful blankets and some products from a fellow who makes wooden knitting needles and shawl pins. (I bought some knitting needles to use for hangers for my woven wall hangings. The folk there were lovely and friendly to us as well as to the other "fibre tour" group that we kept crossing paths with. It was a busy shop!

We were pushing the 5:00 closing time but they did not rush us in any way. Their website says you can go look at the sheep but since we were so close to closing we decided (after some shopping of course) to move along to the next stop.

Then on to Earth Art Cashmere – which may be one of my favourite places I have ever been.

We pulled in and were met by a couple friendly, fuzzy white dogs. The yard was full of chickens, ducks, some geese and some cats. Chris came out to meet us and we popped into the shop. The cashmere is so soft and beautiful that I felt oddly like I was in a museum or someplace that I needed to whisper. There was yarn plus various knitted and crocheted garments, all done in the softest cashmere I have ever felt.

She asked if we wanted to meet the goats and of course we said yes so out to the barn we went – being introduced to chickens and ducks and geese along the way. We also met Millie the blind pot bellied pig and gave her a bit of a scratch. Out in the field were the 65 goats that make up her flock… (herd?). She told us that 65 goats make hers one of the larger cashmere farms in North America. Chris explained that they comb rather than shear the goats, which eliminates any blunt edges on the hair and is what makes it so soft.

Along with the goats was a large brown and white steer named Arlo plus a llama, mini horse and a donkey. These last three kept their distance but Arlo definitely wanted some attention. Chris allowed us quite a bit of time out in the field and introduced us by name to as many of the goats as possible. Some came over for a scratch and a pet and they are as soft as you’d expect.

Honestly I could have stayed forever at Earth Art Cashmere – it was a wonderful experience and really made our day! But we did have to leave eventually so I bought two small skeins of cashmere mixes – one a sort of rusty orange and one in navy.

We went on to Tatamagouche for a bite to eat and a look around at the Sun Mercantile. I restrained myself from the yarn supply (they carry a fair selection including some local alpaca yarns) and instead bought a recipe book for making dishes with molasses. Yum!

This drive along the sunrise trails made for a fabulous day! It was incredibly scenic, with a stop along the way to gaze at River John and about 100 or more blue herons (!) lounging at the mouth of the river at low tide. I would recommend this tour to anyone who likes yarns, or animals, or interesting and pleasant people... It was a wonderful day.